It is the highest point of the Iberian Mountain Range (2,373 m.) featuring a very diverse bioclimatic gradation.

The great mass of Moncayo marks the boundary between three kingdoms: Castille, with Soria behind it, Navarra, just above it, and Aragón at its foot. White and dormant in winter, alive and green in spring, and welcoming and evocative in autumn and summer. At 2,316 metres, it is the highest point on the Iberian Mountain Range. There are no other peaks around it to belittle or soften its all-powerful presence. Its summits are a prodigy of nature. It rises like an island from 1.000 metre altitude at its base.

The Moncayo pastures are a protected natural space, originally designated a Site of National Interest and, under Royal Decree dated 1978, a Natural Park covering over 1,388 hectares of protected land. It attracts some 300,000 visitors every year.

From Litago, San Martín, Vera, Tarazona, etc, one can access this magical mountain of Aragón. The population at the foot of Moncayo is scattered in a dozen villages full of charm in the middle of nature:

Throughout the year the Moncayo Natural Park is transformed by the successive seasons: Spring with its many-coloured blossoms; summer with its overwhelmingly luxuriant forests; the awe-inspiring colours of the beech and oak woods in Autumn, where we can pick a variety of mushrooms; and winter, with its snow-capped peak, cold temperatures and ghostly naked forests, especially when shrouded in fog. 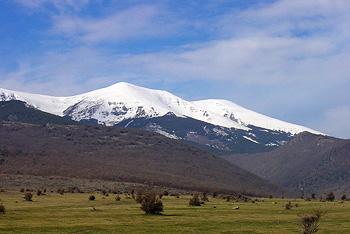