Southwest of Navarra lies the Bardenas Reales Natural Park, a unique semi-desert area covering 42,500 hectares that, despite its bare, inhospitable appearance, holds great natural assets. Within it there are three natural reserves.

Water, limestone and clay have carved spectacular shapes that will transport you to a world of almost lunar appearance, scattered with ravines, flat plateaus and solitary hilltops.

Its fanciful formations and disquieting barrenness were a source of inspiration for painters and writers, in addition to which it was a refuge for bandits and other legendary characters.

It has likewise been used as a location for TV spots and films including Airbag, Mutant Action, The Pride and the Passion, and The World is Not Enough. All of this makes it a unique destination to discover on a SEGWAY.

Stopping at the exceptional viewing points, like Alto de Aguilares, is a privilege that affords the most comprehensive panoramic view of the Bardena Blanca, or Balcón de Pilatos, an exceptional observatory for birds of prey. Ride a SEGWAY around unforgettable enclaves, such as Castildetierra and Pisquerra (Bardena Blanca), with their spectacular formations.

The Bardenas Reales is an unusual and varied natural landscape that will not leave you indifferent. This was the domain of famous bandits like Sanchicorrota. Legend has it that his horse had its shoes fitted back to front to throw pursuers off his track. You too can lose yourself in this unique enclave, and take the opportunity to discover the Ribera Navarra area as well. 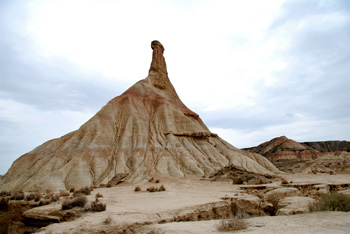